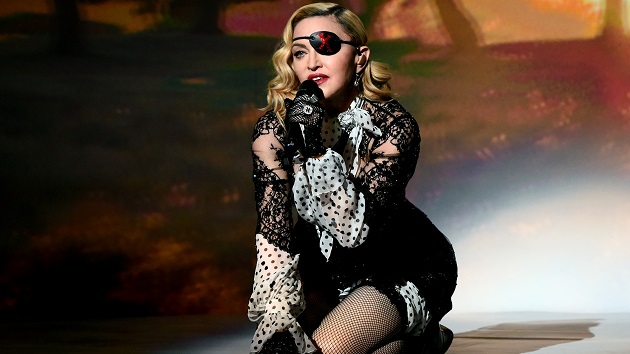 Kevin Mazur/Getty Images for dcpMadonna canceled her Sunday performance in Paris after a terrible fall forced her to go on bed rest once again.  Her Madame X tour has been limping along after the “Holiday” singer suffered a series of injuries and now walks with a cane.

“Here I Am——Flesh and Blood,” The 61-year-old sorrowfully announced in a lengthy Instagram post on Sunday. “If only knees didn’t twist and cartilage didn’t tear and nothing hurt and tears never fell out of our eyes.”

She then humbly admits against the photo of her striking a triumphant pose that she is “human” before revealing what caused the latest cancellation.

“I Fell 2 nights ago on stage when a chair was literally pulled out from underneath me by mistake and I landed on the floor on my tail bone. I made it thru the show last night but just barely because I hate disappointing,” Madonna explained.

Calling herself a “broken doll held together with tape and glue,” the singer announced that she must “stay in bed and rest for a few days” because she is determined to finish her tour “with a smile on her face and in one piece.”

She ended her post by sincerely thanking her fans for their understanding.

Madonna’s Madame X tour has been mired by a series of forced cancellations.  Since the start of the tour, which launched last September, the “Hung Up” singer pulled out of 13 scheduled performances due to sustained injuries.

After factoring in production issues at two separate stops in New York City and Los Angeles, the tour has suffered 15 show cancellations, overall.